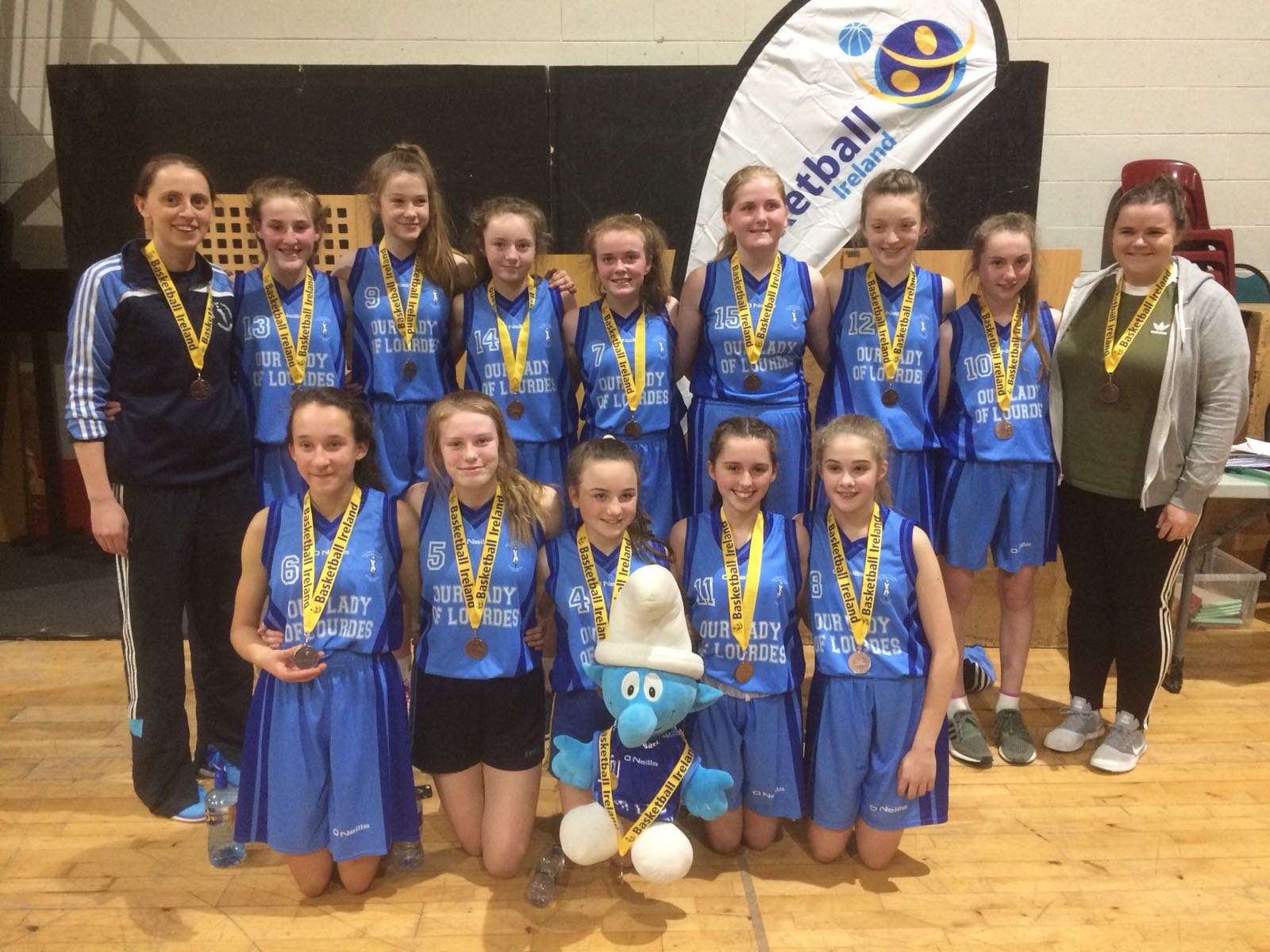 Our Lady of Lourdes, Rosbercon travelled to the home of Irish Basketball in Tallaght in a bid to become All Ireland champions in the Minor girls C League where they played St. Mary’s, Ballina in the semi final. With the two semi finals and the final taking place in the same venue, on the same day, it was all to play for on the day.

The game started very tentatively for the OLOL girls, and Ballina settled the better of the two teams in the opening minutes racing into a 5-0 lead. A quick time out was taken by OLOL and it seemed to settle the nerves slightly. A free thrown from Julia Halicka and a great baseline move by Kirsten Kenny gave the Rosbercon girls a little more confidence and kept them in touch, however, St. Mary’s were able to penetrate the centre of the key far too easily and got a few easy baskets to finish the quarter 9-3 up.

The second quarter saw an increase in intensity by the OLOL girls, especially Aisling Ryan and Sinead Curran who started to run at the opposition, St. Mary’s foul count increased as a result and the girls converted from the line. Despite some good play OLOL just couldn’t convert all that pressure into points on the scoreboard and St. Mary’s increased their lead at half time going in 15-6 up.

True to this 1st year team’s form, the 3rd quarter was one where the girls took on the challenge to make a comeback and get back into the game. Some great drives to the basket by OLOL’s Julia Halicka carved open the opposition’s defence and spurred the rest of the team to increase the intensity. As a team they worked relentlessly and this effort allowed for the better offensive opportunities. St. Mary’s S.McCann kept her side just slightly in front going into the last as their lead was reduced to just 4 points (21-17).

With nothing in it going into the last, Ballina settled into the fourth more comfortably and got a two quick baskets. It seemed that very time OLOL got back within 4 points that St. Mary’s responded. With 3 minutes on the clock there was 6 points between the teams and OLOL had to throw everything at the opposition if they were to turn it around. OLOL implemented a full court press to try and get a few early steals and some easy baskets which gave Halicka and Ryan some success however in the end St. Mary’s number 8 McCann finished off the game with 6 points and helped her team to a 32-25 win to progress to the All Ireland final while OLOL had to be content with the bronze medal in their first trip to the All Ireland semis since 2000.

The Our Lady of Lourdes should not be too despondent as they played great basketball throughout the season. For some of the team it was their first year ever playing basketball and so with more training and experience they should improve even more. It is also worth noting that this was the first time in 7 or 8 years that any Wexford school has made it to the All Ireland semi final stage of the competition and so the team should be proud of their achievements to date.
St. Mary’s Ballina went on to play Scoil Mhuire, Ennis in the final and won on a 39-25 scoreline.